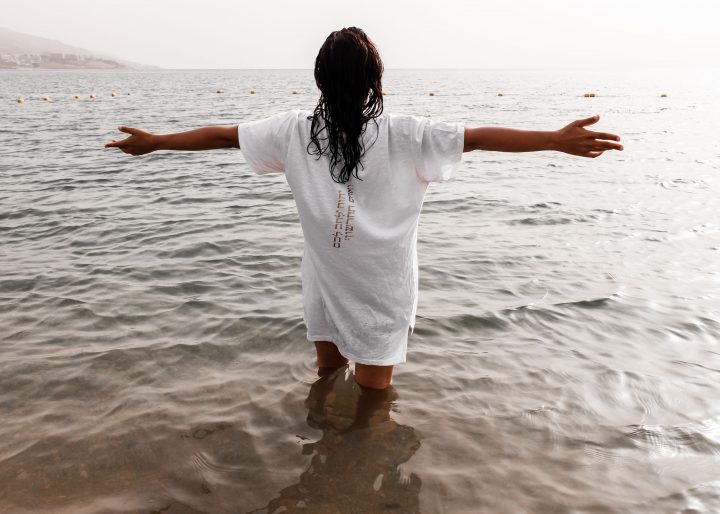 You know when I sit down or stand up. You know my thoughts even when I’m far away. You see me when I travel, and when I rest at home. You know everything I do. You know what I am going to say even before I say it, Lord.

You go before me and follow me. You place your hand of blessing on my head. Such knowledge is too wonderful for me, too great for me to understand! – Psalm 139:2-6 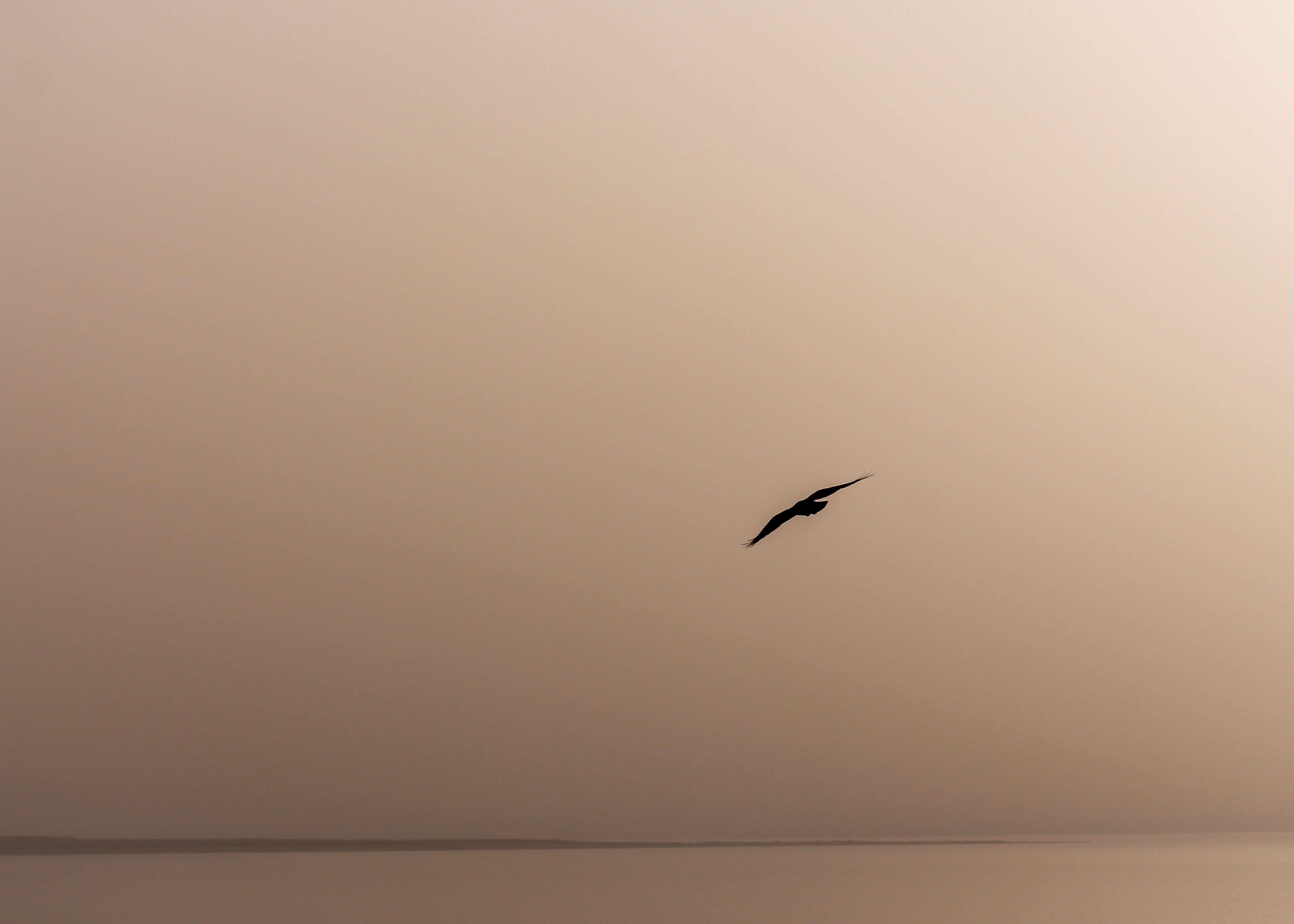 The closing of 2018 is upon us and is an opportune time to count our blessings as well as reflect on some areas in need of change. In many ways, the earthly life is merely a rehearsal for Heaven so let your heart be filled with great joy knowing that God is always with us and has His eyes on us wherever we go. I’m grateful to have had the privilege of setting foot on Jordanian soil earlier this year. Oh, my excitement and intrigue! I can’t believe it’s been 10 months already.

Upon entry at customs, I had my first experience in secondary questioning. Being randomly called aside to be questioned by two stoic officials in a small room is a pretty standard procedure in the Middle East. Within minutes, which to me may have felt a tad longer, my passport and papers were handed back to me with a curt “Welcome-to-Jordan!” Our local tour guide, an unassuming local with a wealth of knowledge on the land, met us outside the airport. We drove through the busy streets of Amman; I vividly recall how our driver pushed through the busy traffic, driving in the wrong way up on one-way streets, shouting at disgruntled on-comers. ¡Ay dios mío! No need for stress, I simply drew my attention away to the new surroundings, the excitement, and the adventure.

We embarked on our journey through Jordan, an incredible adventure through the lands of ancient history. This trip breathed life into some of the stories from ancient times, stories told in my childhood, stories of the God of Abraham, Isaac, and Jacob. I would love to ‘cross over the Jordan’ to the ‘Holy Land’ someday. It would also be wonderful to see Egypt, Turkey, and Lebanon, God willing.

I’m deeply grateful for this experience especially meeting the friendly locals and other travelers. We exchanged smiles. We shared. We loved.

A few highlights from my trip include walking in the dust of ancient biblical figures, marveling at ancient ruins and quietly contemplating the omnipresence of our magnificent God.

On the floor of St George’s Church is the oldest known geographical mosaic map of the Middle East. This map, called the Madaba Mosaic Map, is a treasure of early Christianity dating back to AD 560. The main feature of the map is the ‘Holy City’ of Jerusalem.

Madaba is known as Jordan’s City of Mosaics. Its rich mosaic history continues at the Madaba Arts & Handicraft Center, which is both a souvenir shop and training center. The locals are trained and employed to create beautifully intricate designs on a wide variety of items. I loved the warmth of the ladies who worked here, their remarkable skills, friendliness and smiles blessed by heart. 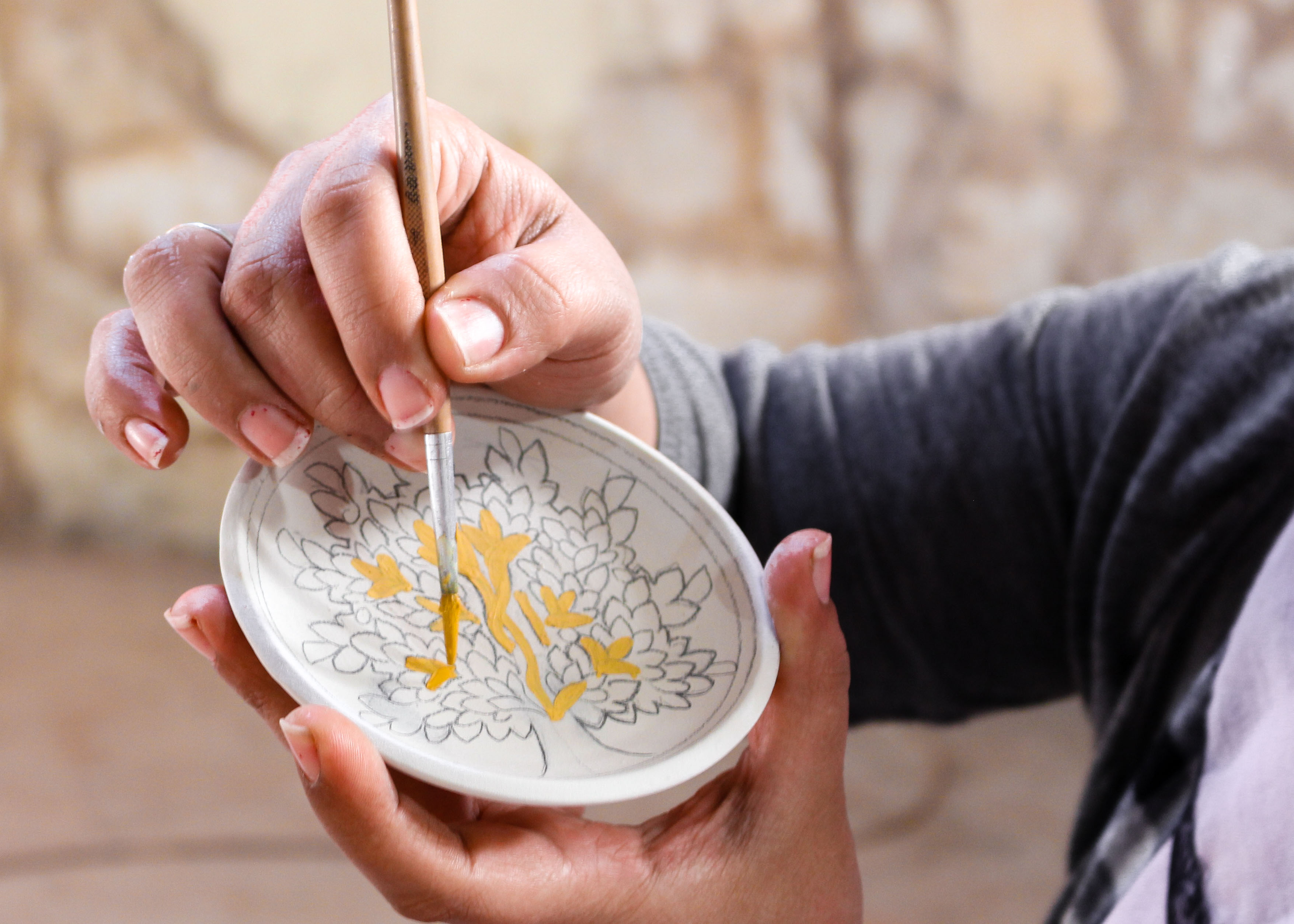 From here we make our way to the Memorial Site of Moses, Mount Nebo …

“Moses was 120 years old when he died, yet his eyesight was clear and he was as strong as ever. The Lord buried him in a valley near Beth-peor in Moab” – modern-day Jordan running along the eastern shore of the Dead Sea (Deuteromony 34:5-7).

See the Holy Land from this elevated ridge in Jordan, the place from where God granted Moses a view of the Promised Land. After leading the headstrong Israelites through the desert, God told Moses “you shall not cross over there”, at least not in his earthly life as Moses did eventually reach the Promised Land, he and Elijah were seen with Jesus at The Transfiguration (Luke 9:28-36).

On the summit of Mount Nebo is a breathtaking panorama of the Holy Land, the valley of the River Jordan, Bethlehem, Jericho, and Jerusalem, however much more visible on a very clear day, unlike the day this photograph was taken.

This particular rolling stone, known as The Abu Badd found behind the Memorial Church of Moses at Mount Nebo, was once used as the fortified door of a Byzantine monastery in the village of Faisaliyah. I think it could be quite similar to the stone rolled away from Jesus’ tomb (smile).

Mount Nebo Church houses a beautiful collection of Byzantine mosaics, the remains from the small church built by the monks between the 3rdand 4thcentury to commemorate the end of Moses’ life. The church was a place of pilgrimage by early Christians from Jerusalem however little is left of the earlier building.

Created by Italian artist Giovanni Fantoni, imaginatively merges the life-saving bronze serpent set up by Moses into the desert (Numbers 21:4-9) and the cross upon which Jesus was crucified. I ascribe to the Substitute Atonement, The Old Covenant was written in stone, but the New Covenant is written on our hearts. The New Covenant (or New Testament) is the promise that God makes with humanity that He will forgive sin and restore fellowship with those whose hearts are turned toward Him. Jesus Christ is the mediator of the New Covenant, and His death on the cross is the basis of the promise (Luke 22:20, Romans 6:14–15).

Immersed in the salt-rich waters and suddenly overcome with buoyancy. Floating on my back in this salt-rich elixir of the Dead Sea with no power of my own, I gaze up toward the Heavens in an act of surrender. Also called the Sea of Arabah or the Salt Sea, the Dead Sea is hedged with mountains to the east and the gentle slopes of Jerusalem to the west.

Ironically, gazing over the shimmering waters from the lowest place on earth, I find myself reflecting on my deepest lows. I’m reminded of the Lord’s promises to bring life from death. The old will pass away and God will make His creation anew … Aleluya! 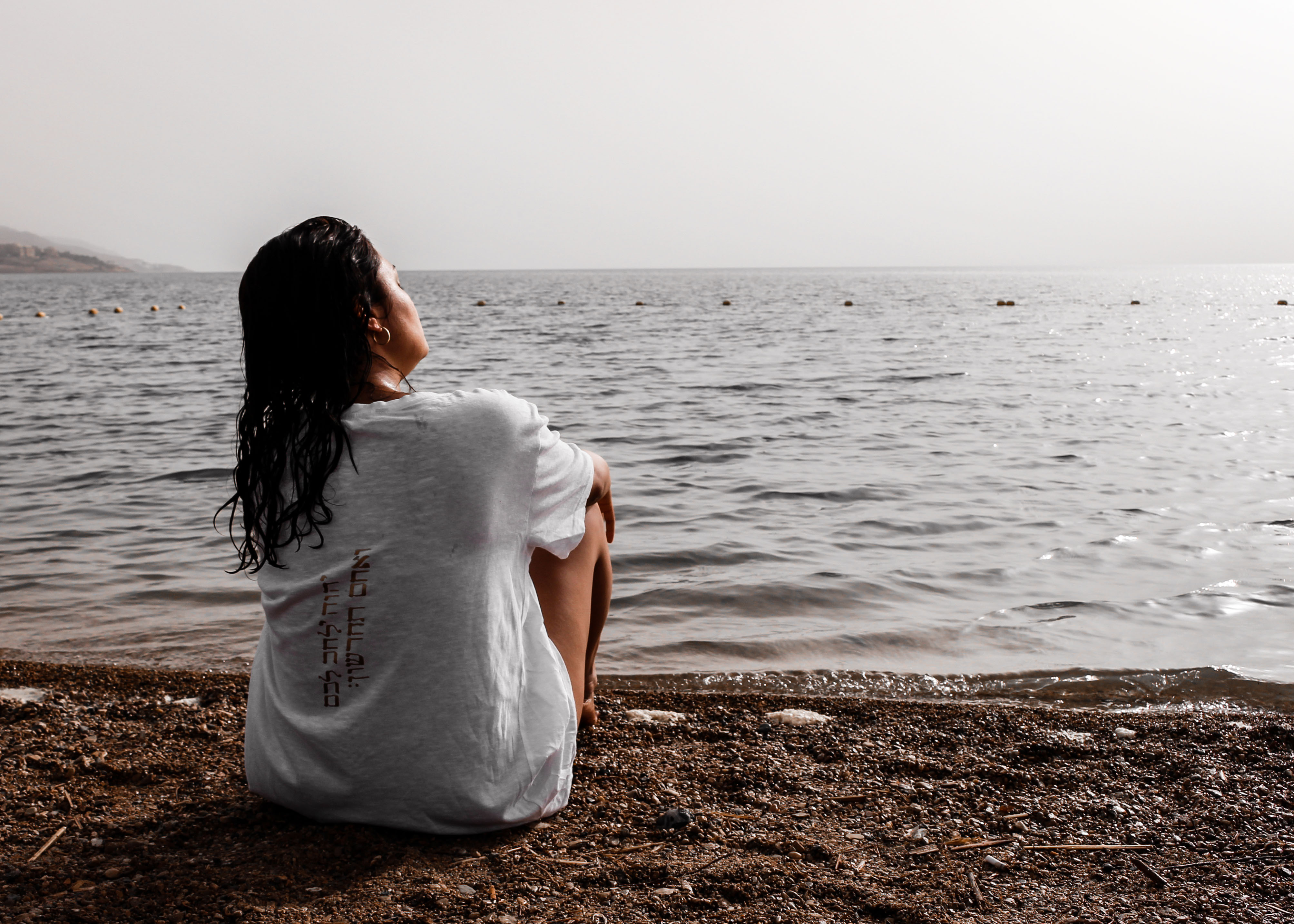 God stopped the flow of the Jordan River in an area opposite of Jericho so that the children of Israel could cross over into the Promised Land on dry ground (Joshua 3:14-16). 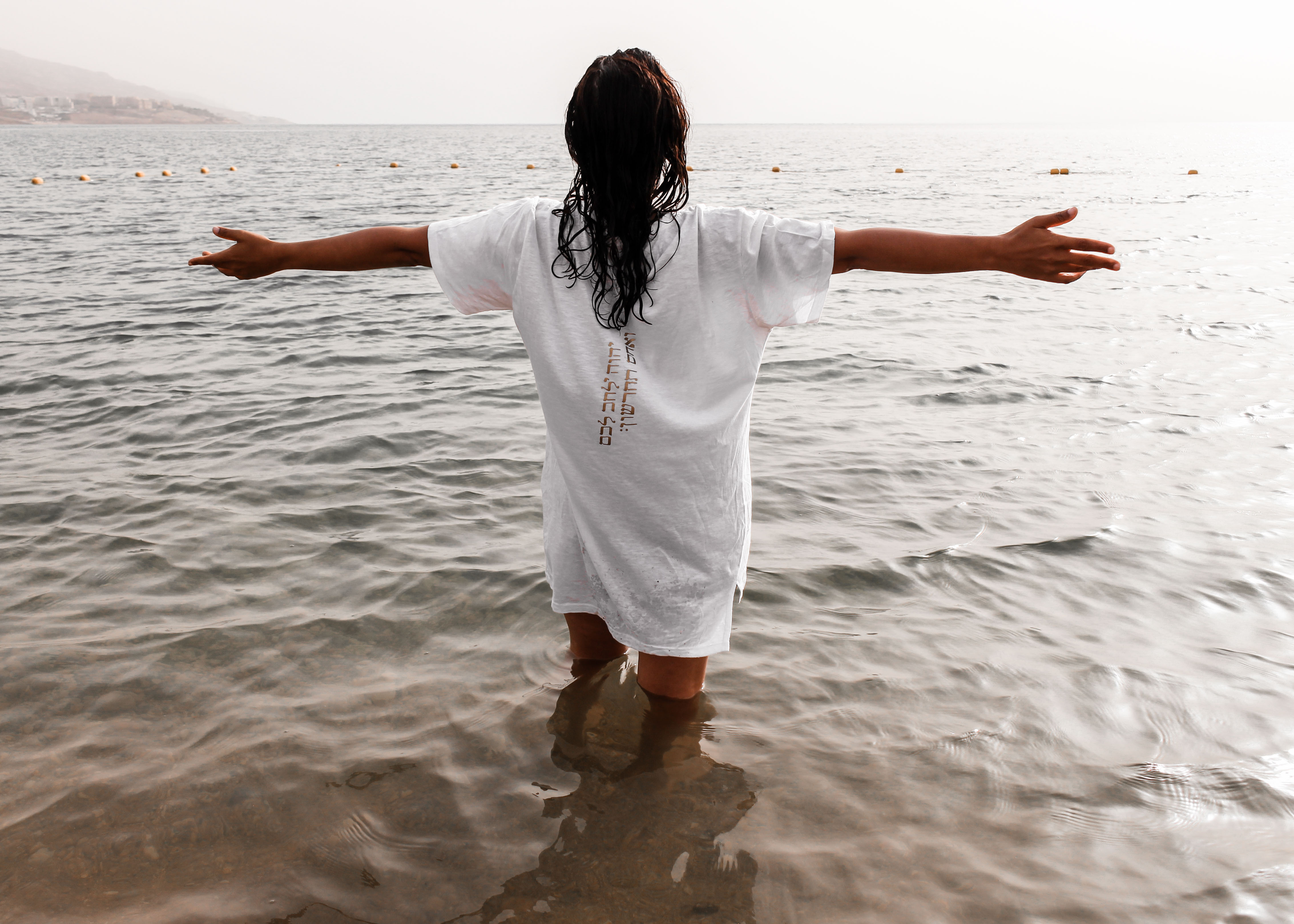 It’s quite startling to think that the Dead Sea will live again as described in Ezekiel 47:8-12 and Zechariah 14:8. It describes a time when Jesus will rule the earth in the Millennial Kingdom and how the water will flow from Jerusalem’s Temple Mount making the Dead Sea fresh and pure with fishermen lining its banks. Looking at this sea with my natural eyes, it is hard to comprehend that fish will abound in it and life will flourish. For man this is impossible but with God, all things are possible!

John, the Baptist, was sent by God to tell everyone of the true light and to baptize many in Bethany, an area east of the Jordan River. It is also here where he testified to the coming of the Messiah, the first coming of Christ. In John 1:26 he tells the priests and Temple assistants sent by the Jewish leaders: “I baptize with water, but right here in the crowd is someone you do not recognize. Though His ministry follows mine, I’m not even worthy to be His slave and untie the straps of His sandals.”

The next day John baptizes Jesus with water so that He might be revealed to Israel. He saw the Holy Spirit descending like a dove from heaven and resting upon Him. Bethany beyond the Jordan is considered a place of transition, new beginnings. Instead of the waters parting, the doors to Heaven were opened.

Not too far from the Jordan River are three churches built by the Byzantines to commemorate Jesus’ baptism by John.

The Jordan River is very small and dirty today. Jordan and Israel take up large amounts of the river’s water that winds heavily from the Sea of Galilee all the way to the Dead Sea. 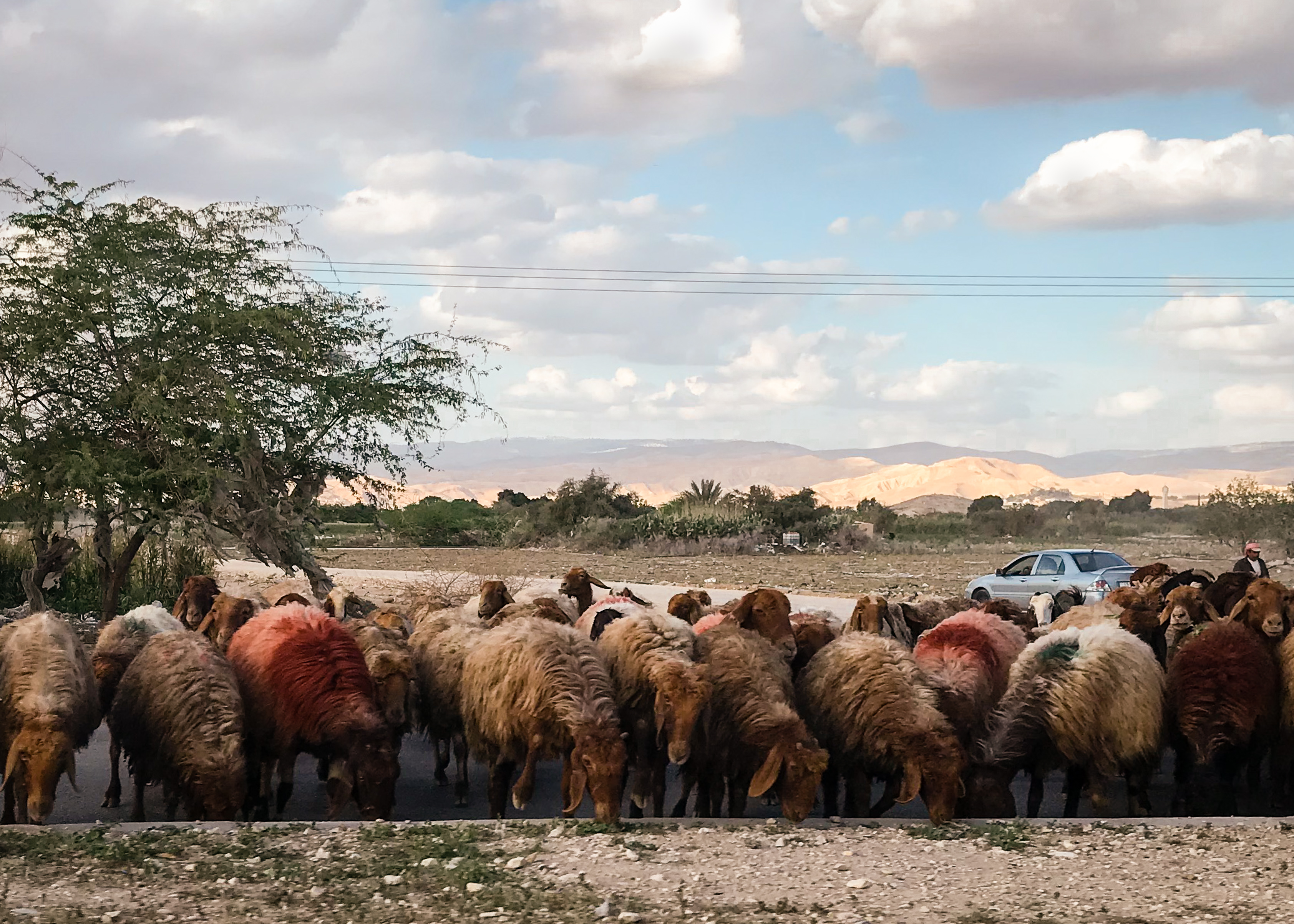 Wishing you God’s best in 2019, may your heart overflow with love and gratitude for all He has done and is about to do.

Join me in Petra and Wadi Rum next. ¡Hasta la próxima!